Today on Journey with Jasmine – we, in our own small way, would like to celebrate the Great Leader, Malcom X on what would have been his 92nd Birthday. As I write this, I feel a sense of unworthiness – how do I put words together in such a manner that will adequately honour such a GIANT?! (wipes sweat from forehead).

When I was young, I was blessed enough to have an older brother who whilst only in his teens, was highly conscious. Looking back at how highly developed he was at sixteen; is – upon reflection, amazing to me, and I have to give our mum praise for instilling in us a deep spirituality. We were raised as Christians, but my brother developed an interest in Islam. Hip hop music was and still is a big part of our lives, and at that time (early 90’s) I remember Public Enemy had a song called ‘Bring the Noize’, and in this song was the line: ‘Farrakhan’s a prophet that I think you ought to listen to’. That was my first introduction to the Nation of Islam.

During school holidays I would go and spend days on end with my older brother in his council flat in Shepherd’s Bush. He would literally sit me down on a chair for hours and preach the Qur’an to me. If he wasn’t preaching the Qur’an to me, we would sit down for hours and watch Farrakhan speeches on VHS. Back then, it felt like torture – I just wanted to be a child and play video games or go outside and play, but I’m forever indebted to him for instilling a knowledge of self in me at such a young age.

I had always seen the iconic picture of Malcolm X standing by his window with a machine gun, and I had heard the phrase ‘by any means necessary’,

but at that time I didn’t know much else. That was until Spike Lee made the movie Malcolm X starring Denzil Washington. Man, you couldn’t tell me and my brothers nothing about that movie! We couldn’t wait to go and see that film! We sat in the cinema ENGROSSED by the story of a man who started out as Malcolm Little, a hustler, a criminal. I’ll never forget the scene where, Denzil playing Malcolm, has texturiser in his hair. If you’ve ever used texturiser you know it starts to burn around that 5 minute mark! He calmly tells Shorty (Spike Lee) that it’s starting to burn. So they go over to a sink to wash it out but there’s no water and he ends up having to wash his head in the toilet! To this day, that scene literally has me in hysterics because I used to use texturiser religiously and could totally relate!

I remember the film being really long, maybe 3 hours or so and there being an interval, so people could take a break I guess. I didn’t need a break.

I watched and saw how Malcolm Little went from being a petty criminal, running gambling spots, to going to prison and after being introduced to the teachings of Elijah Muhamad, transforming into Malcolm X. A most intelligent and fearless black leader. Watching that movie then and later as an adult, looking back at old footage of this Great in interviews, was and still is SO beyond inspiring! 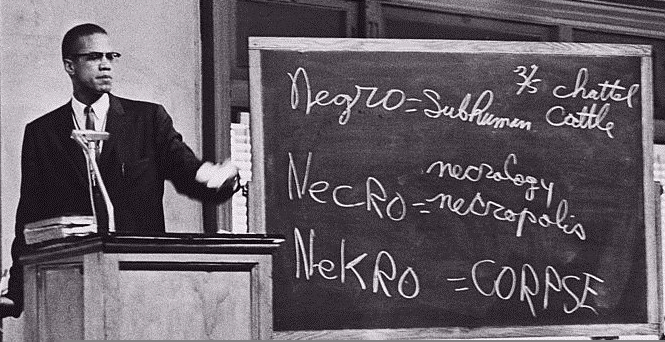 He has taught me to be a proud black man, to walk with my head high. Through his teachings I learnt an alternative black history that didn’t revolve around slavery. Fifty-two years after his passing on he still lives in me and through many others. Words couldn’t express my gratitude…
‘A Man who stands for Nothing will fall for Anything’.

Where the Greats lead, We Follow.
JayCee & Jasmine Reinah